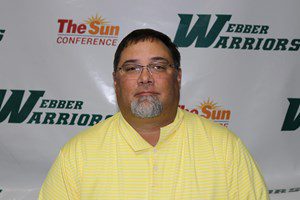 Melesky was also an assistant girls’ flag football coach at Lennard High School (Ruskin, Fla.) this past season in 2020.

At Robinson High School in Tampa, Florida, Melesky was the Head Cheerleading Coach from 2010-2019, was an assistant flag football coach from 2014-2019, and most recently was an assistant girls’ soccer coach in 2020. His flag football teams at Robinson were state champions in 2014, 2016, 2017, 2018 and 2019 while his cheerleading team won its state championship in 2012. In 2011, Melesky was named the Hillsborough County Coach of the Year for cheerleading.

Melesky has NCAA Division-II coaching experience as the Head Cheerleading Coach at the University of Tampa (Tampa, Fla.) from 2004-2008. During this time, Melesky also worked as the assistant to the sports information director, the assistant to the director of athletic marketing, and was the public address announcer for soccer, volleyball and baseball.

Before his time in Florida, Melesky was an assistant cheer coach at NCAA Division-I Virginia Tech (Blacksburg, Va.) from 2002-2004.

From 1998-2012, Melesky worked for All-American Cheer and Dance assisting with the production and choreography of the NFL Pro Bowl in Honolulu, Hawaii.

Melesky earned his Bachelor of Arts degree in communications studies from Virginia Tech in 2002.

Coach Melesky and the Webber women’s flag football team will start recruiting immediately and will begin NAIA competition in the spring of 2021 using the new Warrior turf field on campus to practice and play home games.

With support from NFL FLAG and RCX, the NAIA will work to develop league infrastructure and operations for the first women’s flag football competition governed by a collegiate athletics association.

The NAIA will begin working with NFL FLAG and RCX immediately to outline competition guidelines and next steps for schools and conferences interested in instituting women’s flag. The first competitive season will be held in the spring of 2021.

The NAIA will host an emerging sport or invitational championship in the spring of 2022. An emerging sport in the NAIA is defined as at least 15 participating institutions, while invitational can be defined as at least 25. A sport must have a minimum of 40 participating institutions to be considered for full championship status.

Zulu
Accessibility, Cookie and Privacy Policy
We use cookies to optimize our website and our service.In addition, if you are disabled or need any assistance navigating this website please use the UserWay feature on this website. Alternatively you can email us on info@webber.edu or call us on 863-638-1431 and one of our staff will provide you personalized support.
Manage options Manage services Manage vendors Read more about these purposes
Preferences
{title} {title} {title}